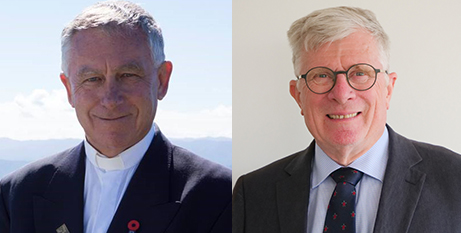 Cardinal John Dew (left) and Reverend John Gilmore are among the observers who will attend the Plenary Council’s second assembly.

Leaders of the Catholic Church in the Asia-Pacific region and the head of the National Council of Churches in Australia are among those who will serve as observers at the second assembly of the Plenary Council.

There is a long tradition of having observers attend major Church events, and there will be five such observers at the Plenary Council.

Cardinal John Dew, the Archbishop of Wellington, will be in Sydney for the event from July 3-9 representing the Church in New Zealand.

Cardinal Dew said he considered it “a great honour” to be invited to be an observer for the Council, and he is looking forward to being in person for the second assembly, after joining online last October.

“The Church in Australia and the Church in Aotearoa New Zealand have had very good relationships over many years, and this is an opportunity to dialogue and share together regarding some of the questions that we all face in this part of the world,” he said.

“For me this is an opportunity to be with the Australian Church, clergy and laypeople together, reflecting on how we live as the People of God in our part of the world today.

“There are so many issues which need a Gospel response, and it is my hope that the Plenary Council and the Synod process will bring new life to the Church internationally.”

Cardinal Dew said Catholics in New Zealand had been following the Plenary Council’s progress closely in the early stages, but he conceded the COVID-19 pandemic saw the interest wane.

At about the same time, Pope Francis called the Synod of Bishops on Synodality, which caught the attention of the Church around the world, including in New Zealand.

“The Synod process seemed to add something to the work that was already being done in Australia to prepare for the Council, because the hope that the Synod process offered lies in the opportunity to re-engage with the Second Vatican Council’s emphasis on the Church as the People of God its potential to affect the Church internationally,” Cardinal Dew said.

“The emphasis on the People of God being engaged at all levels in the life of the Church around the world is what has been giving new life and hope to people everywhere.”

Reverend John Gilmore, the president of the National Council of Churches in Australia, the leading ecumenical body in the country, will also be an observer.

He said being present for the assembly “is a way of affirming the ongoing Plenary journey of the Catholic Church as it explores it priorities for the next stage of its life”.

“Having churches well engaged in mission – including the sharing of faith and expressing the justice and joy of God’s kingdom – is part of the whole church in Australia growing in health. I also look forward to the explorations of the themes and the discussion that will follow,” he said.

“The invitation to observe at the Plenary Council is a way of the Catholic Church being open to other Christian traditions. My presence is a sign that this openness is welcome and received.”

Revd Gilmore said he expects the Plenary Council to be an example of the “mutual learning” that happens when Christian communities gather with one another.

“We learn and are stretched and enriched in our being together,” he said.

“I look forward to this personally and with anticipation that I will receive more than I bring.”

Other observers who will attend the second assembly of the Plenary Council include Cardinal Charles Maung Bo of Yangon, Myanmar; Apostolic Nuncio to Australia Archbishop Charles Balvo; and Catholic Church Insurance’s Ross Castle.

Plenary Council vice president Bishop Shane Mackinlay said the Catholic Church in Australia is grateful for the support of the observers, both in their time and their prayerful accompaniment.

“To take a week out of very busy schedules to show their care for the People of God is a generous commitment and their presence will enrich our gathering,” Bishop Mackinlay said.

Find out more about the Plenary Council at: www.plenarycouncil.catholic.org.au