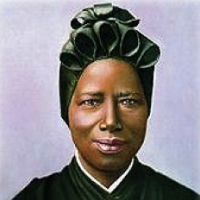 The Catholic Church in Australia and around the world will recommit to fighting slavery and human trafficking in the coming days as it celebrates the feast of St Josephine Bakhita.

St Josephine Bakhita, the patron saint for victims of slavery, was born in the west Sudanese region of Darfur in 1869. As a young girl, she was kidnapped for slavery in both Sudan and Italy.

Following her delivery from slavery, Josephine became a Canossian Sister and dedicated her life to sharing her story and to supporting the poor and suffering. She died on February 8, 1947 and was canonised in 2000.

A 2016 United Nations report uncovered more than 500 different human trafficking routes across many parts of the world. It is estimated that millions of women, girls, men and boys are trafficked annually into domestic servitude, sexual exploitation, pornography, forced marriage and forced labour. Almost 80 per cent of detected victims of trafficking are women and girls.

“These forms of exploitation flourish because of society’s greed for cheap goods and services and because it is easy to forget that those who meet these needs are human beings with their own innate God-given dignity,” Parramatta Bishop Vincent Long Van Nguyen wrote in 2016 in a paper for the Australian Catholic Social Justice Council on human trafficking and slavery.

ACRATH and the ACBC are calling for a fourfold commitment to: slavery prevention, victim protection, legal prosecution of perpetrators and partnerships for change. This commitment begins with awareness-raising and action at a diocesan, parish, school, family or personal level to eliminate slavery in all its forms.

Bishop Greg O’Kelly SJ, chairman of the Bishops Commission for Justice, Ecology and Development, said support for the commemoration of the feast day continues the Australian Church’s focus on this important issue.

Last November, the ACBC endorsed the “Statement of Support for an Australian Modern Slavery Act” prepared by the Human Rights Commission Roundtable earlier in 2017.

“Pope Francis has called us to make a difference. Our steps may be small, but together we can achieve a great deal, especially when we work with others to stop human trafficking.”

ACRATH president Sr Noelene Simmons SM said: “Our joint statement supports the Worldwide Network of Religious Life Against Trafficking in Persons in calling on governments, religious and civic organisations to unite, and to increase their commitment to reduce the crime of human trafficking.

“In this age of unprecedented mass migration brought on by conflict and natural disaster, women and children are particularly vulnerable to being trafficked and exploited. Through our prayer and our actions, let us be advocates for their freedom and dignity.”

Parish resources have been developed to mark this day and can be accessed at: https://acrath.org.au/take-action/world-day-of-prayer-against-human-trafficking/