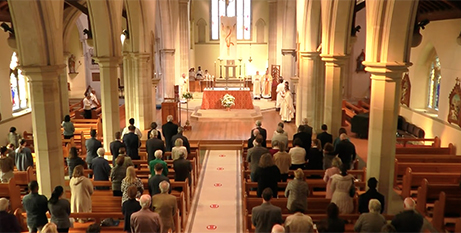 Despite a fall in the number of people identifying as Christian, the fact almost half the population is still Christian means Jesus’ voice remains prominent in Australia, Archbishop Mark Coleridge has said.

On Tuesday, the Australian Bureau of Statistics released the first data from the 2021 Census. That included figures on religious affiliation, which show Catholics now make up 20 per cent of the population – down from 22.6 per cent in 2016.

Catholics, at almost 5.1 million people, remain the largest religious group by a significant margin, followed by Anglicans at 10 per cent.

The combined Christian population is now 44 per cent. Those professing no religion comprise 39 per cent of those who answered the question on the Census.

Archbishop Coleridge, the president of the Australian Catholic Bishops Conference, said the decline in Catholic numbers was “no great surprise”.

“It’s been clear for some time that the Church is no longer the power in the land we once were,” he said.

“But we remain a large minority engaged far and wide in service of the community,” including in education, social services, health and aged care – as well as parish life.

“Almost half the population still identify as Christian, which means that Jesus is very much part of the mix in the Australian soul,” Archbishop Coleridge said.

“That means his will remain a key voice as we work together to shape the life of the nation into the future.”

The Census data already released shows that the number of Australians born overseas continues to grow, which brings with it increased cultural and religious diversity.

Archbishop Coleridge said many such immigrants are themselves Catholics, and “the Catholic community has been greatly enriched by people coming to Australia from elsewhere”.

The Bishops Conference’s National Centre for Pastoral Research will now commence its analysis of the data for those who self-identified as Catholics in the Census. That research is designed to help the Church better understand its people.

That information will be released, along with other key demographic data, later in the year.