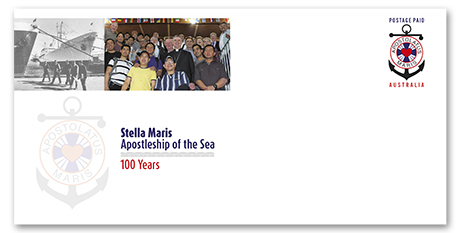 Australia Post will release a commemorative envelope later this month celebrating the 100th anniversary of the Catholic Church’s ministry to seafarers through the Apostleship of the Sea.

The postage-paid envelope, which will cost $1.35, features an historical image of an Australian port and a photo of Melbourne Archbishop Peter A. Comensoli visiting his local Stella Maris centre in 2018.

Bishop Bosco Puthur, Bishop Promoter for the Apostleship of the Sea Australia, said he was thrilled to learn that Australia Post had agreed to showcase the ministry’s work.

“Our Stella Maris chaplains, workers and volunteers are very excited that their dedication is being recognised in this way, but they ultimately want this to be a moment that highlights the critical role of the seafarers they serve,” he said.

“This anniversary comes at a time when seafarers are facing particularly challenging times. COVID-19 restrictions mean some men and women can’t even set foot on dry land for months on end. Tens of thousands of people are also working without any sense of security due to expired contracts.”

Bishop Puthur said the recent disappearance of the Gulf Livestock 1 ship off Japan has been tragic news because of the local connection, with two Australians on board, but there have been dozens of shipwrecks in 2020 that went largely unreported.

“The work of seafarers is often dangerous, but it is indispensable when you consider how many of the goods we take for granted have arrived in Australia by sea,” he said.

“May these envelopes be a source of pride for those who work on the oceans and also inspire more people to recognise the value of that work.”

While the Apostleship of the Sea ministry, which supports Stella Maris centres around the world, was founded in 1920, the Church’s work in port ministry in Australia goes back three decades earlier. In 1889, members of the Society of St Vincent de Paul began visiting ships in the Port of Melbourne.

The Apostleship of the Sea is the largest ship-visiting network in the world. In Australia, the ministry typically includes crews visiting Stella Maris centres, celebration of Masses and other worship services, and the provision of care packages including items like toiletries and phone cards.

During COVID-19, the ministry has become less interactive, but Stella Maris centres have found new ways to assist crew members in ways that demonstrate their support but don’t breach local restrictions.

Click here for more information and to purchase the Apostleship of the Sea envelopes.