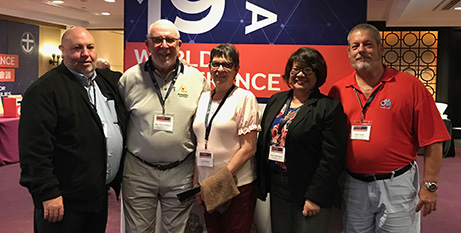 Australian delegates at the recent International Christian Maritime Association conference say the gathering helped strengthen their resolve to minister to people who make their living on the ocean.

Six Australian Catholics were among the more than 250 people from 40 countries in Taiwan for the week-long conference, which marked the 50th anniversary of the organisation’s founding.Roslyn Rajasingam, the national director of the Apostleship of the Sea in Australia, said it was a source of great encouragement to see how the important ministry is exercised in other countries.

“As the Apostleship of the Sea in Australia is committed to support seafarers when they are in our country, it is gratifying to know that the assistance will continue to be provided when they leave our shores and dock at another port anywhere in the world,” she said.

“I come out of the conference truly hopeful that the workers of member organisations of ICMA will work together and always be dedicated to provide spiritual and practical help for seafarers.”
Pope Francis sent a video message of prayer and support to the delegates, which was played at the conference’s opening ceremony.

“May you help seafarers and maritime personnel to know Jesus Christ and to live in accordance with his teachings, in respect and in mutual acceptance,” the Holy Father said.

“I encourage you to surmount whatever difficulties you may encounter in your mission and to promote with conviction the spirit of ecumenism.”

Peter Cahill, who works at the Stella Maris Centre in the Queensland town of Mackay, said the emphasis and theme of the gathering “was to come together as one and to work together as one”.

“I think, moving forward, this can only strengthen this ministry with the eventual value being received by the many seafarers as one consistent welfare agency across the world, regardless of where they are and who is giving the service,” Mr Cahill said.

He said spending time with people from different countries, cultures and denominations who had a shared determination of caring for seafarers was “a very rewarding experience”.