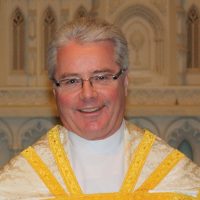 The new head of Australia’s Ordinariate of Our Lady of the Southern Cross was installed at a special Mass in Sydney on Tuesday night.

Canadian Msgr Carl Reid is the second priest to lead the Australian Ordinariate, which was established in 2012 by Pope Benedict XVI to welcome groups of Anglicans seeking full communion with the Catholic Church.In March this year, Pope Francis accepted the resignation of Msgr Harry Entwistle, who had served as leader of the Personal Ordinariate of Our Lady of the Southern Cross for the past seven years.

The Personal Ordinariates, of which Our Lady of the Southern Cross was the third in the world, were established to provide a way for groups of Anglicans to be received into full communion with the Catholic Church – as Catholics – while retaining distinctive elements of their theological, spiritual and liturgical patrimony.

Before his appointment as head of the Ordinariate of Our Lady of the Southern Cross, he was dean of all Canadian parishes of the Personal Ordinariate of the Chair of St Peter, which also covers the United States.

Sydney Archbishop Anthony Fisher OP, who presided at this week’s installation at St Mary’s Cathedral, congratulated Msgr Reid, saying he “comes into the position with tremendous experience as a bishop in the Anglican Catholic Church in Canada”.

“I wish him and his wife Barbara my prayers and support in this important ministry,” Archbishop Fisher said.

“I also salute his predecessor, Msgr Harry Entwistle, who has contributed so much to the success of the Ordinariate in Australia.”

Speaking from Sydney the day after the installation Mass, Msgr Reid said it had been “a humbling experience”.

He said in his first three weeks in Australia, he had already found many similarities between Canada and his new home, including small Ordinariate communities and vast distances.
“My challenge is to continue the good work begun by Msgr Entwistle, not only establishing new communities, but also in encouraging growth in the communities beyond the Methodists and Anglicans,” he said.

Regarding a range of issues facing the Catholic Church in Australia at present, Msgr Reid said he would spend considerable time listening and learning, including about the Plenary Council process.

He said while the appointment to Australia was unexpected, he had taken his vows very seriously and had “pledged to serve Mother Church in whatever capacity deemed appropriate, so we are now looking forward to the challenge”.

Msgr Reid will be based in Sydney in the Ordinariate parish of St Bede the Venerable, which worships at St Joseph’s Catholic Church in Newtown.