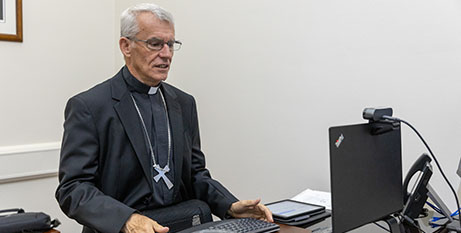 As he closed the formal proceedings of the first general assembly of the Fifth Plenary Council of Australia Saturday evening, Archbishop Timothy Costelloe SDB reflected on a week that had been “inspiring, challenging and sometimes unsettling”.

Archbishop Costelloe, the Council’s president, adjourned the Council’s first assembly and summoned its 278 members to gather again in July 2022 for the second and final assembly.

A Mass at 11am AEDT Sunday, October 10, livestreamed from St Stephen’s Cathedral in Brisbane will conclude the first assembly.

Archbishop Costelloe said to members the first assembly had been an exercise in the process of “synodality”, which Pope Francis describes as “walking together”.

“We have been walking together this week – and in rejoicing in that, and thanking God for that, we can also ask ourselves how well have we avoided the danger of walking alone, or only in a small group of like-minded people?” he said.

Archbishop Costelloe said the members of the Church are called to be “a sign and an instrument of communion with God and of unity among all people”, something he had spoken of in his homily at the Council’s opening Mass six days earlier.

“This week we have tried to discern together how we, the Church, can become more fully a clear, unambiguous and effective sign of this communion,” he said.

“We have done this because we are sure that it is as the People of God, the body of Christ in the world, that we can be God’s instrument for the establishment of God’s kingdom.

“All week we have been exploring together possible ways of re-casting ourselves, re-positioning ourselves, the Church in Australia, for this mission. And this exploration will continue.”

Among a rich variety of experiences during the week, which included time spent as a full assembly, many hours of small group discernment on the agenda’s 16 questions and times of prayer, Archbishop Costelloe acknowledged it had been “an inspiring, challenging and sometimes unsettling week for many of us”.

“We have been told of the joy of belonging to the Church and the hope it brings into the lives of many,” he said.

“But we have, too, touched the pain of those who have suffered, and continue to suffer, through their engagement with the Church.

“As we respond to all of this we are called, I believe, to heed the words of Saint Paul who tells the Christians in Philippi, and us: ‘you must have in you the same mind that was in Christ Jesus’.”

Archbishop Costelloe reminded members of the support they had been receiving throughout the Council journey, but in a particular way during the first assembly.

“This week we have not been alone, notwithstanding the isolation which has been forced upon many of us because of COVID,” he said.

“We will continue to walk with them as we share our experience of the Plenary Council with them and as we reflect with them on the ever present and pressing question: ‘What do you think God is asking of us in Australia at this time?’”

Despite the first assembly having taking place wholly online, with members in a small number of dioceses able to gather for fellowship, Archbishop Costelloe said the “bonds we have forged and the trust we have established” will make the next nine months of the Council process easier.

The work to be undertaken in preparation for the second assembly in July will be determined by the Plenary Council’s steering committee.

Find out more about the Plenary Council and watch the closing Mass of the first general assembly from St Stephen’s Cathedral at www.plenarycouncil.catholic.org.au