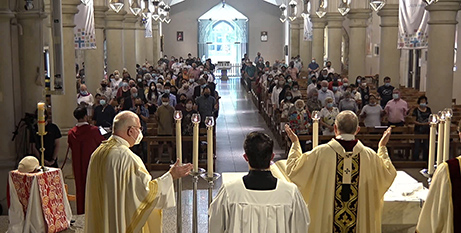 A Mass celebrated by Australian Catholic Bishops Conference president and Brisbane Archbishop Mark Coleridge has closed the first general assembly of the Fifth Plenary Council of Australia this morning.

The Mass comes a week after Archbishop Timothy Costelloe SDB, the Plenary Council president, opened the first such gathering in Australia for more than 80 years with a Mass across the expanse of the continent in Perth.

In the intervening six days, 278 Plenary Council members participated in the assembly online, with a small number of dioceses able to bring members together if COVID-19 restrictions allowed.

The first assembly had been planned to be held in Adelaide in October 2020. After being postponed by 12 months, the format changed to connected gatherings in capital cities and then wholly online.

In his homily, Archbishop Coleridge reflected on his week as one of those 278 members, seeking to capture how they felt at the end of the assembly.

“Weary and a bit ragged, because it was very hard work; relieved, even slightly surprised, because so much could have gone wrong; satisfied, because it has produced real fruit; grateful to God and to each other, because it has all been more gift than hard work; intrigued to see what happens between now and the second assembly in the middle of next year,” he explained.

“It’s all been a marvel of technology; a mountain of superb work from so many people, and a maelstrom of words, insights, feelings, convictions and resolutions all with deep respect for each other, even and perhaps especially when we disagreed.

“But, above all, the assembly has been a monument to grace and faith – God’s grace and the Church’s faith in this fraught time.”

Archbishop Coleridge drew on the Gospel for Sunday’s Mass to see how the protagonist had similarities with the Council’s members.

“Through the journey of the Plenary Council and this week’s assembly, the Word of God has come to us as a call, every bit as much as it did to the rich man in the Gospel we have heard,” he said.

“Rich he may be, but he is also a searcher, as we have been through this week.”
That searching will continue in the period between now and the second general assembly in July 2022.

“As we turn from this week, we look to the months till the second assembly where we will – please God – gather face-to-face in Sydney,” Archbishop Coleridge said.

“Our discernment will continue intensely through the months of fermentation, so that the seeds sown in the first assembly may finally bear fruit in the second assembly, equipping us well for the journey beyond the phase of the Council’s celebration to the long phase of implementation of its Spirit-shaped decisions and decrees.”

In concluding his homily, Archbishop Coleridge mentioned that the person facilitating his small group’s discussions during the first assembly had been a midwife, who had likened the journey of discernment to bringing a child to birth.

“The process is slow, painful and messy, but in the end it is wonderfully fruitful and joyful as the baby is born,” he said.

“Beyond the maelstrom of this week and all that lies ahead may the Church in Australia come to know the fruitfulness and joy which the Holy Spirit brings from all the pain and mess, because nothing is impossible for God.”

To watch an archive of this morning’s livestreamed Mass, click here.

Find out more about the Plenary Council at www.plenarycouncil.catholic.org.au