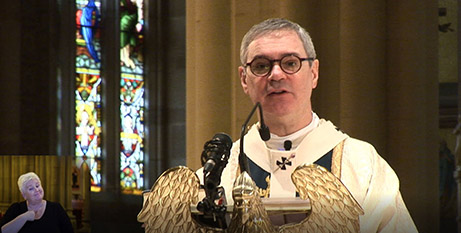 Archbishop Peter A Comensoli in today’s Mass for the Fifth Plenary Council of Australia has said the Council’s task is to reveal the face of Christ – a face that blends cultures, languages, ethnicities and histories.

The Melbourne Archbishop celebrated Mass on the final full day of the Council’s first general assembly, which will conclude with Mass at St Stephen’s Cathedral in Brisbane Sunday morning.

The Plenary Council journey will continue for nine months, culminating in the second general assembly in July 2022.

During the prerecorded Mass in an almost empty St Patrick’s Cathedral, Archbishop Comensoli expressed his hope that members would have reached the closing stages of the assembly after several days of “invigorating conversation and productive engagement … leading to (we all hope) the propositions which will form the basis of the final stages of the Plenary Council”.

“But let us not lose sight of our primary task here: that is, to reveal through our deliberations the face of Christ among us, so that He might be reflected in the face of his Body, the Church in Australia, at this time and in our places,” he said.

Archbishop Comensoli said that face of Christ “is particular to our time and place”. It has “very ancient and indigenous lines etched into it; lines of great dignity but also immense pain”.

“How have we sought to reveal these lines as also lines of hope as well?” he asked.

The face of Christ particular to this time is also “marked with the lines of a great mixture of ethnicities, languages, cultures and histories; still significantly Anglo-European in heritage, but becoming ever more Asian and sub-Continental in appearance”.

“How have we unveiled the face of the Church in this emerging orientation, and arranged her household accordingly?” Archbishop Comensoli asked.

Preaching after the Gospel in which Jesus calls Simon Peter to move from being a fisherman to a fisher of people, Archbishop Comensoli urged the Plenary Council members to be people of the Gospel.

“The Gospel will always reveal itself embodied in a people; at the same time, this people – Christ’s Body – is to find ourselves embodied in the Gospel,” he said.

“We are the people Christ now calls to go out into the depths of missionary endeavour, there to find a catch, but also to be caught ourselves.”

Access the archived version of this morning’s Mass here.

Find out more about the Plenary Council at www.plenarycouncil.catholic.org.au

The Mass to close the first general assembly, celebrated by Archbishop Mark Coleridge, will be livestreamed on the Council website tomorrow, Sunday, October 10, at 11am AEDT.