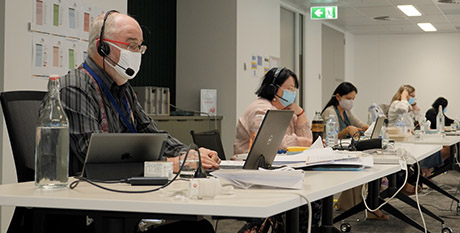 The concept of “sniffing out” the presence of God in the world, articulated by theologian Fr Richard Lennan in an address to the Fifth Plenary Council of Australia, struck a chord with many members as they continued their discernment.

Fr Lennan, a priest of the Maitland-Newcastle Diocese and an expert adviser to the Council speaking from Boston, said the Church had “no option but to exist in the present”.

“This moment of history is where God meets us and where our response to God is to meet the world,” he said.

Quoting Fr John Fuellenbach SVD, Fr Lennan said “our task is to sniff out the presence of God in the world”.

Stephanie Sullivan, speaking to the assembly today on behalf of her small group, said members were “taken” by these words in their conversations on prayer and liturgy as an encounter with Christ.

The group shared a sense of “being challenged as ‘Church’ to be like Jesus, who loved with a compassionate, human heart”.

“We believe that prayer is never selfish or for us alone; it nourishes relationships with each other.”

Prayer was seen as a key to formation by the group addressing the question of how we might better form leaders for mission, as Loretta McKeering reported to the assembly.

Other themes from the group’s sharing were the importance of the Christian family as the “first formators”, a sense of community and its impact on a person throughout life, new models of seminary life and ongoing formation for priests, and learnings from ecclesial and lay-led movements.

Continuing the theme of prayer and formation, Alison Newell said her group’s conversations on Catholic education included reflections on “praying with the heart of a child, praying with the students” and supporting parents and staff in regard to prayer, with one idea being spiritual directors in schools.

Like several other groups, Alison said some members felt the group was “going around in circles” with “confusion, anxiety and frustration” named, but that a way forward was to “look for convergences in our discernment to date”.

Professor Dermot Nestor also drew on Fr Lennan’s presentation and his reference to Pope Francis’ call for an integral ecology when reporting back on his group’s conversations about ecological conversion.

He stressed that all of creation was sacred and that we were servants, not masters before outlining an action plan based on the adoption and implementation of Laudato Si’.

Claire Victory spoke of her group’s concern about “how we speak in a way that makes sense to the world”.

“Are there voices we’re still not listening to, and lessons we haven’t yet learnt from the Royal Commission?” she said of her group’s discussion on governance.

“We must let go of the model rooted in clericalism and tribalism and instead listen to what the Spirit is saying and also listen to the voices of those who we have been excluded.”

Also looking at governance in relation to synodality and co-responsibility, Professor Renee Kohler-Ryan said her group felt that the inclusion of women should not be reduced to the single issue of ordination for women.

She noted the need for understanding of how lay and ordained, women and men, each bring unique gifts to governance and proclamation of the Gospel.

Deearne Gould told the assembly that her group believed a cultural of continual renewal and review should be encouraged and that relations between parishes, dioceses, new movements and public juridic persons should move out of a “silo mentality”.

“Structures are not the end, but are a means to the end,” she said.

The small group session on Aboriginal spirituality sought to understand more deeply the submission made to the Plenary Council by the National Aboriginal and Torres Strait Islander Catholic Council.

Mary O’Reeri told the assembly their discernment had also drawn members to consider the Uluru Statement from the Heart and how they could encourage the Council and all Catholics to put their collective weight behind the establishment of a First Nations voice enshrined in the Constitution.

Other topics covered in the small group sessions included selection and training of candidates for the priesthood, supervision and “accreditation” of clergy and the third form of the rite of Reconciliation.