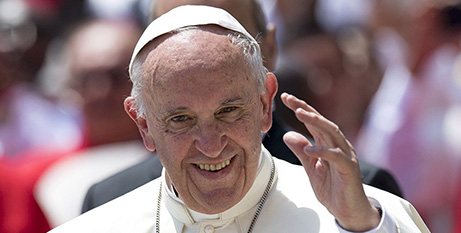 Pope Francis has sent greetings and blessings from Rome as the program for the Fifth Plenary Council of Australia, the first such event in this country in 84 years, began today.

A message read out during the opening plenary session this morning said the Plenary Council “represents a singular ‘journeying together’ of God’s people in Australia along the paths of history towards a renewed encounter with the Risen Christ in the power of the Holy Spirit”.

The message, read by Msgr John Baptist Itaruma from the Apostolic Nunciature in Australia, said Pope Francis “prays that the Council may be a graced occasion for mutual listening and spiritual discernment, marked by profound Communion with the Successor of Peter”, a term used to describe the Pope.

“In this conciliar process, the Church in Australia is challenged to listen to the voice of the Spirit and to bear witness to the perennial truth of the Gospel and to develop new and creative expressions of evangelical charity,” said the message, signed by Secretary of State Cardinal Pietro Parolin.

Archbishop Mark Coleridge, the president of the Australian Catholic Bishops Conference, in a message to Pope Francis said the Council’s 278 members are “deeply conscious that the Plenary Council takes its place within the universal Church”.

The exchange of messages between the Holy See and the Church in Australia followed an opening address from Plenary Council president Archbishop Timothy Costelloe SDB.

Archbishop Costelloe, who yesterday inaugurated the Council by celebrating the opening Mass, welcomed the members, as well as a number of Catholic leaders from Pacific and Asian countries, as well as the president of the National Council of Churches in Australia.

Drawing from St Paul and the writings of Pope Francis, Archbishop Costelloe laid out the important task the Council’s members are undertaking.

“As today as we take this bold and crucial step forward in our own response to the call for the Church’s transformation we can be inspired and encouraged by the energy, persistence, creativity and fidelity of Saint Paul and by the dream of Pope Francis whose words have helped inspire and shape the agenda which will guide us through the days ahead,” he said.

Archbishop Costelloe acknowledged that members would likely be coming with “high hopes”, “great expectations”, but also “conscious of the heavy responsibility we bear”.

“In the mysterious ways of God’s providence, it is we who have been called together to undertake this historic and grace-filled task on behalf of the whole Catholic community of our nation,” he said.

“In an important sense, therefore, we come as representatives of the People of God in Australia. We carry with us, as a privilege and as a responsibility, the precious and sometimes fragile faith of God’s people: we carry their hopes and dreams, their pain and suffering, their joy and their optimism, their fears and their hesitations.”

Archbishop Costelloe said the Church in Australia – and therefore the members of the Council – will carry the weight of the child sexual abuse crisis through the Plenary Council’s celebration across the next nine months.

“So many lives have been diminished and even destroyed because of this dreadful failure,” he said.

“We carry the weight of the shame with us into this assembly, and equally we also carry an unshakable conviction that our care for those who have suffered so much, and our responsibility to make our Church settings places of safety and security for our children, our young people and vulnerable adults, must remain two fundamental aspects of our life and ministry as the Church in Australia.

“This reality is surely one of the ‘signs of the times’ which we are called to discern in the light of the Gospel.”

Archbishop Costelloe closed his opening address by urging all Council members to keep their eyes fixed on Christ during the first general assembly.

“He is, after all, the Way, and the Truth and the Life. May we all show ourselves, this week, to be in every way his true disciples,” he said.