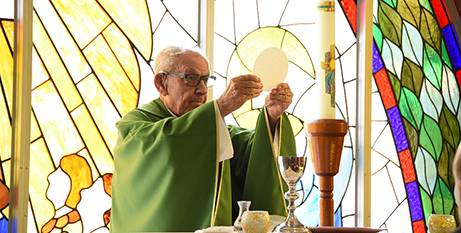 by Neil Helmore and Anne Chellingworth

As the Church in Australia journeys towards the first assembly of the Fifth Plenary Council of Australia, the first since 1937, the question asked by many is how the Church has changed since that last gathering.

While he doesn’t remember any specifics about that event 84 years ago, Fr Frank Gordon – one of the oldest members of the upcoming Council – is testament to the changes that have taken place.

Fr Gordon, who will participate in his capacity as vicar general for the Cairns Diocese, was five years old at the time of the last Plenary Council.

Born at Tweed Head Hospital and raised in nearby Coolangatta, Frank attended primary school in Coolangatta before the family moved to Toowoomba where he completed his secondary schooling.

After school, Frank worked with his father in their mechanic’s garage, which gave him the experience of working with people in the community – something he values greatly.

Fr Gordon says his experiences with the Cardijn movement “brought me into touch with the Gospel story in real life”. That was what led him to the seminary, and still drives him today.

Originally training to be a priest for Brisbane Archdiocese, Frank was asked if he might consider a request from Cairns Bishop Tommy Cahill that men preparing for the priesthood for Brisbane be sent north.

Brisbane Archbishop James Duhig called for volunteers to serve in Cairns. Frank accepted, along with several other young men, and went straight to Cairns after he was ordained.

Fr Gordon continued to be involved in youth movements in Cairns for many years. Although called the Catholic Youth Movement in Far North Queensland, it was also based on the Cardijn movement.

Interpreting Scripture as it relates to people’s lived experience has always been an important part of his priesthood. He still values opportunities to listen to people’s experiences in his day-to-day ministry.

“In my working years, school years too, I had an interest in making sense of the Gospel,” he said.

“When I was ordained and I came to the diocese, almost from day one, every week of my priestly life in this diocese, over 60 years now, I have sat down with lay people, especially young people, to share the Gospel in life.

“It’s helped me to discover the richness in the inspired word of God but also enriched me by listening to people’s experiences. And to be in touch with the need that people have.”

What are Fr Gordon’s thoughts on holding a plenary council now?

“The issues identified in the instrumentum laboris (working document) are basic, they are fundamental, and the questions asked are ones that need to be answered in every age,” he said.

“One of the keys words put forward when we first heard about the plenary council – to be listening, to have a listening mind and heart to what the spirit is saying and to what people are saying. And we’re not good at that normally. We jump in very quickly with solutions or my opinion, so to speak.

“One of the things I’ve learned over the years is that people can say things, but if you keep listening you develop a way of listening to their heart – not just what they’re saying.”

Fr Gordon continued: “People can talk, talk, talk and they’re trying to be objective about what the world should or shouldn’t be doing, but what they’re really speaking about is a difficulty they have. It’s for the listener to find out what is really concerning them. So listening to the heart.”

Asked about his hopes for the Plenary Council, Fr Gordon said good and important questions have been put before the members and the wider Australian Catholic community – “and I don’t have the answers to those questions”.

“But if you’re asking me personally about what I would hope would come out of it, it would be something very basic,” he said.

“I’ll put it this way: helping people to rediscover what it means to be baptised. Now that’s very basic.”

This is Fr Gordon’s first foray into the world of computers and meeting online. He humbly admits that he is computer illiterate.

Like many other members, though, he’s got great support from his local team – in this case, Cairns’ Plenary Council coordinators Cathy Spencer and Anne Chellingworth.