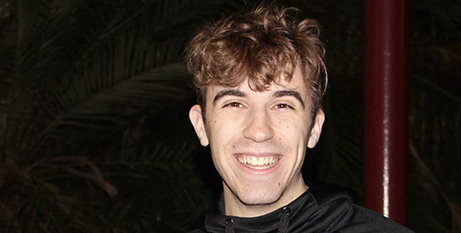 by Michael Kenny, Archdiocese of Sydney

A quietly-spoken 20-year-old university student and youth minister from the regional New South Wales city of Orange is set to make history in October as the youngest member of the Fifth Plenary Council of Australia.

Matthew Brown is currently in the first year of a double law and international studies degree at the University of Wollongong, but has returned to his home town to prepare for what he believes will be perhaps the greatest challenge he has faced so far in his young life.

A proud graduate of James Sheahan Catholic High School in Orange, Mr Brown received a surprising phone call from the Diocese of Bathurst last year, inviting him to become one of only five members on the Plenary Council from his rural diocese, including Bishop Michael McKenna.

“I was school captain in my final year and loved my time there so much that I decided to take up a position as a youth minister in my gap year. It wasn’t long into my time in that role that I received the call from the Diocese”, he explained.

“I was a little hesitant at first because I didn’t really appreciate what a plenary council entailed. But after some discernment, I knew this was such a landmark event for the future of the Catholic Church in Australia and such a great opportunity for youth to be represented.”

Mr Brown attributes his strong Catholic faith and commitment to serving the community to his education at James Sheahan High, where he was heavily influenced by its dual charism of the De La Salle Brothers and the Mercy Sisters.

“A real turning point for me came in year 11 when I volunteered for an immersion trip to the northern Sri Lankan city of Mannar, where I spent a week alongside my classmates teaching at a Lasallian school there”, he said.

“I had spent a year fundraising for the trip and it was so rewarding seeing the impact that had as students benefited from having new computers and iPads thanks to the fundraising we had been involved with in Orange.”

Mr Brown said he wants to build upon that spirit of serving those in greatest need through the Plenary Council – the first such event in Australia in more than 80 years.

“I really want to see a Church more open to serving the marginalised, especially Indigenous Australians who have such a beautiful spirituality we can learn from,” he said.

“I also feel very much called to be a genuine voice for youth at the Plenary Council. I believe our young Catholics really want to see our Church heal from its dark past, especially around its history of clerical abuse where there is a real need for greater accountability.

“In the interests of future generations, we need to move forward and build up a Church which is committed to a greater future.”

Plans to hold an in-person gathering of 280 members of the Council’s first assembly in Adelaide from October 3-10 have been abandoned and replaced with each member now participating in the assembly from their own homes. In some regions not affected by COVID-19 at that time, members might gather in small groups.

Mr Brown said he has been undertaking his university studies largely online since the pandemic began and he is therefore very much at home as the Plenary Council shifts towards largely online delivery.

“While I was very much looking forward to meeting and socialising with other members in person, I’m very used to working online,” he explained.

“But certainly, depending upon the COVID restrictions in place by October, there may still hopefully be a way that we can gather in a Diocese of Bathurst hub, given our relatively small numbers.”

Over recent months, Mr Brown has been speaking about the Plenary Council at local youth festivals, helping to encourage other young Catholics to engage with this historic event.

“Youth ministry has really helped provide me with the skill set to step into this important role and I’m really looking forward to engaging with fellow Plenary Council members to serve our Church in such a special way,” he said.