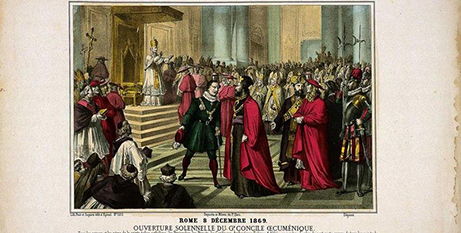 The First Vatican Council opened on December 8, 1869 — the Feast of the Immaculate Conception (Wikimedia Commons)

December 8 marks the 150th anniversary of the opening of the First Vatican Council. This is the second is a series of articles on the Council, its key moments and its legacy.

Being surrounded, and somehow dwarfed, by its monumental predecessor and its young and very influential successor, Vatican I suffers from a kind of “middle child” syndrome in theological and historical scholarship. The tendency to overlook this Council is aggravated by the fact that it produced only two documents and, due to its sudden adjournment caused by the break of Franco-Prussian war, it is generally considered to be an “unfinished” Council.

The most well-known contribution of Vatican I to the life of the Church is its proclamation of the dogma of the infallibility of the Roman Pontiff in matters of faith and morals when he speaks ex cathedra. This happened in the constitution Pastor Aeternus and Vatican I is often associated primarily with this pronouncement, although there has been only one instance when a pope actually used the privilege of infallibility since that Council – the 1950 declaration of Mary’s Assumption by Pius XII.

Since Vatican I, the Holy See has not only ratified (or not) the candidates for local episcopal sees, as has been the case before, but took an active role in appointing them. In this way, the Church gained greater independence from local secular authorities and became more autonomous in its own internal affairs.

Centralisation of authority in practical matters went hand-in-hand with greater unification in theological, liturgical and pastoral matters. Even if post-Vatican I Popes did not use their privilege of infallibility in the official way very often, the aura of infallibility, or at least irreformability, began to surround all of their teaching.

Before Vatican I, Popes were mainly understood as occasional arbiters between arguing individuals or schools. Now they also started to be seen as the main sources of sound doctrine and orthodox theology.

Fr John O’Malley SJ, an expert on Ecumenical Councils, argues that from being a place where things come together, the Holy See became a source from which everything flows.

Such consolidation in doctrine and jurisdiction had an obvious upside in equipping the Church with bonds of unity that it needed in the face of the changing and increasingly anti-Catholic world. However, it also had its downsides. One of them was the rise and increased popularity of the “Ultramontane” sentiment that tended to look to the person of the Pope as the one who lives “over the mountains” (ultra montes) and practically represents God on earth through his supreme authority over all earthly matters.

In this mentality, sometimes labelled “creeping infallibility”, the Pope would be protected from error not only in the rare instances envisaged by Pastor Aeternus, but practically in everything that he says or does. This, however, was not what Vatican I taught.

While it is obvious that every Catholic needs to treat all teachings of the Holy See with utmost seriousness, attention, respect and the level of submission that they require, not every papal teaching, decision, action or prudential judgment is automatically guaranteed to be free from all flaws.

This matter was somehow addressed by Vatican II and by the post-Vatican II Magisterium, but it still requires further reflection today – in times when it becomes increasingly difficult to have a balanced and non-partisan discussion about the papal teaching office in general and the way it is exercised by a particular Bishop of Rome.

The second constitution of Vatican I, Dei Filius, dealt with the questions of divine revelation and the relationship between faith and reason. Its teaching on the primacy of faith and its necessary harmony with reason was well received after the Council. It was developed by future Popes, especially Leo XIII in Aeterni Patris and John Paul II in Fides et Ratio) and it remains one of the most distinctive features of the Catholic intellectual tradition.

The teaching on Scripture and Tradition as two sources of revelation was also accepted with ease, mainly due to the fact that it confirmed what was already taught and believed before the Council.

The teaching about the possibility of knowing God as the principle and end of all things by the natural light of human reason was a contemporary Catholic response to Immanuel Kant’s distrust regarding the capabilities of human intellect in matters of religion and his general contempt for metaphysics.

By confirming the possibility and the usefulness of “natural theology”, Vatican I contributed to the flourishing of Catholic philosophical and theological apologetics in the post-conciliar era.
The teachings on the natural and supernatural order, God’s creation of the world out of nothing (ex nihilo), divine authorship of the books of the Bible or the divine institution of the Church were also received well and were imbedded into theological formation, catechesis and pastoral practice with great efficiency.

Nearly all Councils in Church history met with some opposition. The most well-known movement that rejected the teachings of Vatican I were the “Old Catholics” who refused to accept the teaching of Pastor Aeternus and separated from the Roman Church.
Many historians and theologians today agree that apart from its teachings on particular matters, the prime contribution of Vatican I consisted of finding a slightly new way of being the Church in a changing world.

Although the Council is often criticised for creating an overly centralised and homogenous Church, few would disagree that it helped the papacy to survive the tumultuous 19th century and enabled local Churches to maintain their autonomy from secular powers.

The Council also helped to create a Catholic education system that produced some of the greatest theological and pastoral figures of the 20th-century Catholicism.

Vatican I’s achievements may not be as well known and obvious as those of its older and younger siblings, however, just as every “middle child”, they should certainly not be overlooked.

Dr Mariusz Biliniewicz is associate dean (research and academic development) and senior lecturer in theology at the University of Notre Dame Australia.