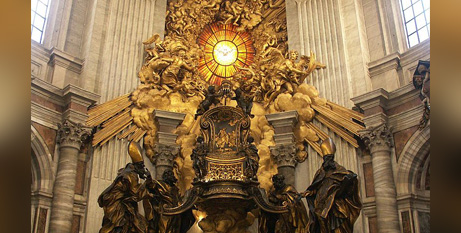 The Chair of Peter in St Peter’s Basilica (Wikimedia)

December 8 marks the 150th anniversary of the opening of the First Vatican Council. This is the first is a series of articles on the Council, its key moments and its legacy.

The First Vatican Council defined papal infallibility, a widely misunderstood teaching of the Church. The history of the Ecumenical Council that met in Rome between 1869 and 1870 reveals what the doctrine of papal infallibility really means.

He who is the Truth, Jesus Christ, willed and promised that the Holy Spirit of truth would be given to his Church (John 14:25, 16:12-15, 17:17-19). Guided by the Spirit, his teaching Church cannot fall into error, which is what “infallible” means. The Holy Spirit leads her into truth and protects her from teaching error.

What needed defining in 1870 was how the Pope teaches infallibly within the Church, as Successor of Saint Peter and supreme teacher of the Church.

After debates and an infusion of German theology (in those days a moderating and scholarly influence), Pastor Aeternus, the First Dogmatic Constitution on the Church, concludes with the definition, that:

“…. the Roman Pontiff, when he speaks ex cathedra, that is, when in discharge of the office of pastor and teacher of all Christians, by virtue of his Apostolic authority, he defines a doctrine regarding faith or morals to be held by the Universal Church is, by the divine assistance promised to him in Blessed Peter, possessed of that infallibility with which the divine Redeemer willed that his Church should be endowed in defining doctrine regarding faith or morals; and that , therefore, such definitions of the Roman Pontiff are of themselves, and not from the consent of the Church, irreformable.”

This should be read carefully. It does not blandly say, without qualifications, “The Pope is infallible”. The Pope can teach infallibly when exercising the Petrine Office, under specific circumstances and only in the area of faith or morals. He cannot teach infallibly on matters of science, politics, economics etc., even as these areas raise moral issues.

The authoritative voice of the teaching Church is her “magisterium”. This functions in several ways. Vatican I focused on the infallible Extraordinary Magisterium of Popes and Councils, which identifies itself with a public act and ceremony. The dogmatic definitions of major Church Councils, certain teachings of the Council of Trent and Pastor Aeternus at Vatican I are examples of conciliar infallibility.

The wider Ordinary Magisterium provides the day-to-day teachings, when Popes, Councils and all the bishops pass on and repeat Catholic doctrines, for example in creeds and catechisms. In continuity with precedents and never adding to Divine Revelation, truth-teaching happens here.
In this context the Pope also makes definitive rulings. I hold that these can be infallible, such as teachings on the matter and form of sacraments, birth control and the ordination of women. Others hold a different view.

On July 18, 1870, as Blessed Pius joyfully proclaimed Pastor Aeternus, a thunderstorm hit St Peter’s, breaking a window in the transept where the Council Fathers met. I have stood looking up at the window, reflecting: thunder, broken glass, divine warning or divine approval? Bishops interpreted it depending on their views, which we need to examine.

Because the agenda was set before the Council, the bishops already formed two parties. Most were Ultramontanes, supporting papal infallibility. Led by the Pope, they included a range of views. Extremists wanted to turn the Pope into a magic oracle. Wilfred Ward, a zealous English convert, is said to have wanted a papal teaching every morning with his breakfast! But most Ultramontanes hoped for a balanced definition and they had skilled theologians and canonists to assist them.

The minority party was known as Inopportunists. Their views ranged from a cautious “not yet” to “no, we do not need this”. Both parties agreed that, guided and protected by the Holy Spirit, the Church teaches infallibly. St John Henry Newman had already made that clear in his Apologia pro Vita Sua (1864). He was an Inopportunist, but he had no access to the Council because in 1869 he was neither bishop nor cardinal.

The two parties elude political categories, “conservatives” or “liberals”. The leading Ultramontane, Cardinal Edward Manning, was a social progressive or liberal, an advocate for trade unionism. By contrast, Newman remained a Tory with a conservative social conscience. In terms of theology, the Inopportunists were conservatives, seeing papal infallibility as an innovation that would rock the boat of Peter. Sticking “conservative” or “progressive” on these parties is as clumsy as attempts to lock Catholics into “left” or “right” today.

After sweltering in July and a vacation, the bishops were meant to meet again in October 1870. But by then the Pope had to suspend the Council. The Italian revolution, Risorgimento, had arrived in town. Garibaldi’s army stormed the gates of Rome and the Italian nation seized its new capital. The Pope was driven behind the Leonine Wall to become the “prisoner of the Vatican” and the bishops hurried home by train or ship.

The French returned to war with Prussia and the revolutionary carnage of the Paris Commune. The Germans witnessed the small schism of “Old Catholics”, who rejected infallibility.

The Pope lost his Papal States, but humiliation was compensated for by the mystical and spiritual prestige of papal infallibility.

Catholics around the world developed devotion to the prisoner Pope, regarded as a living martyr, victim of atheistic forces of revolutionary secularism and Italian freemasonry.

Coming to terms with the secular state would be left to other Popes. Leo XIII opened up social teaching and Pius XI negotiated the 1929 concordat with Italy, which recognised the Vatican City State, the Holy See.

Newman knew all about political under-currents. He felt the brunt of non-Catholic misunderstanding when Gladstone denounced papal infallibility as political and tyrannical. In his Letter to the Duke of Norfolk (1875), rebutting Gladstone’s “expostulation”, Newman demonstrated that he accepted papal infallibility. His own Essay on the Development of Christian Doctrine can justify this development.

Between 1962 and 1965, the incomplete work of Vatican I passed to Vatican II. But St John XXIII required much more: a Council updating the Church, aggiornamento. Because Pastor Aeternus was significantly entitled the First Dogmatic Constitution on the Church, Lumen Gentium at Vatican II is its longer and richer sequel.

In Lumen Gentium 18 and 25, the Council reaffirmed papal infallibility, but it affirmed the teaching role of bishops as the apostolic college and their sharing in the Spirit’s gift of infallibility. This achieved balance, lacking after Vatican I was suspended.

Papal infallibility has been challenged as doctrine. In 1971, Hans Kung rejected it; in 1982, Francis Sullivan SJ tried to restrict it to matters of faith, not morals. By contrast, recently some enthusiastic supporters of the Pope have revived extreme Ultramontanism.

However, we should avoid “creeping infallibility” which exaggerates the authority of papal opinions and comments. Vatican I defined papal infallibility with specific limits and purpose, assuring us in our pilgrim journey of the guidance of the Holy Spirit of truth. As the Lord Jesus himself has promised: “I am with you always.”

Bishop Peter Elliott is a retired Auxiliary Bishop of Melbourne and an expert in Church history.