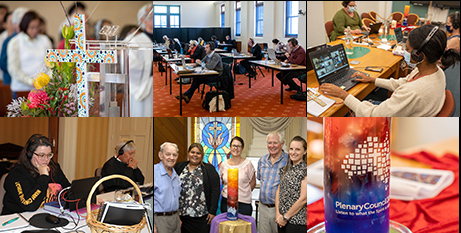 The months between the first and second general assemblies of the Fifth Plenary Council of Australia are a time for “prayer, reflection, maturation and development”, according to a concluding statement from the first assembly.

The statement, approved by the Council’s members during Saturday’s final plenary session, speaks of a week in which regular prayer and spiritual conversations, encouraging deep listening, “allowed space for still nascent dreams and visions to come to greater maturity”.

It came after 16 sessions across six days, encompassing conversations in groups of eight to 10 people, larger groups of up to 30 and gatherings of the full membership of the Council. All sessions were punctuated with time for prayer and reflection.

The concluding statement said the process of members listening to each other in those various forums “has planted promising seeds and raised important questions for us”.

“We have experienced and expressed the range of emotions that come with facing profound issues together, holding in tension diverse interpretations and expectations,” it said.

“Through prayer and reflection, we have been called to be patient with the process, with each other, with the Church and, most importantly, with the Holy Spirit.”

The statement outlines some of the affirmations of the life of the Church that were shared during the first assembly, as well as some of the desires expressed for a Church that renews itself for mission.

“Often expressed through the lens of personal experience, the discernment of this assembly has threaded together conversations about what the Church can offer today’s world on the one hand, and how the world can inform the ways and structures of the Church on the other,” the statement said.

The assembly considered the experience of some groups within the community who don’t always feel at home in Catholic communities. Those groups could include young people, women, single people, parents and families, people with disabilities, people with diverse experience of sexuality and gender, and others “who feel, for a variety of reasons, that there is no place for them”.

“We asked how a missionary Church might connect with those who feel distant from the community of faith,” the statement said.

“Each of these voices has been a powerful reminder that the Church, as a sign of the kingdom of God, has the vocation of being an image of Christ and an icon of grace to the whole human family.”

The statement said the closing of the Council’s first assembly means the journey “now enters a time of prayer, reflection, maturation and development”.

“This will involve continuing reflection by the members of the Council, and consultation with the wider Church community, as we develop propositions for presentation to the second assembly of the Council next July,” it continued.

“In faith, hope and charity, we entrust all these tasks to the guidance and wisdom of the Holy Spirit. Our prayer remains, as always: ‘Come, Holy Spirit. Come Holy Spirit of the great South Land’.”

Read the concluding statement on the Plenary Council website.