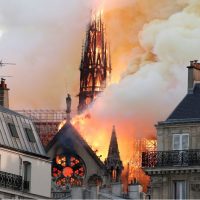 Australia’s religious leaders have sent messages of support and sympathy to the people of France following the devastating fire at Notre Dame Cathedral yesterday.

Australian Catholic Bishops Conference president and Brisbane Archbishop Mark Coleridge awoke to the news and was soon moved to prayer.In a heartfelt video response to the events, he said: “I first had a sense of disbelief and then horror and that sense of horror has been shared by all kinds of people, not only in Paris, but right around the world, believers and unbelievers.

“Whoever you are, there is some deep chord struck by what has happened at the heart of Paris. Because Notre Dame is not just a sacred space it is a great Church, but it is also a vast storehouse of human memory.

“In a moment like this, prayer rises spontaneously from the heart.”

In a sign of solidarity with the Archdiocese of Paris and the Notre Dame community, St Patrick’s Cathedral in Parramatta rang its bells at midday yesterday for one minute in prayer and remembrance.

“Notre Dame Paris is more than its sandstone, gargoyles and stained-glass windows. It is the spiritual home of French Catholicism and indeed a poignant symbol of French culture.”

In his Easter message, Bishop Greg O’Kelly, Bishop of Port Pirie and Apostolic Administrator of Adelaide, said the fire had shocked the world.

“There is symbolism in this grand building which has held in store so much humanity being reduced to ashes. As we look at Good Friday and Easter we can think of the Church and its need to be rebuilt out of the ashes of disillusionment, just as Notre Dame will be rebuilt,” he said.

Wollongong Bishop Brian Mascord said his heart sank when he awoke to the “devastating images” of Notre Dame burning.

“But, what also struck me was that the grief did not extend to just the Catholic community,” he wrote in his Easter message.

“The whole world seemed to be mourning the loss of such an important piece of our history and culture — indeed our humanity. It was like the loss of a beautiful perfumed oil that once anointed the world.”

In a written statement, the Australian Council of Christians and Jews expressed its “deepest sympathies” to the people of France, and Christian believers everywhere, over the “terrible spiritual loss” the nation has sustained through the fire at Notre Dame.

“The loss of the cathedral brings all of us — Christians, Jews and those with no faith tradition at all — to a recognition of the fragility of that which is made by humans in the glory of transcendent being and a transcendent beauty,” the statement said.