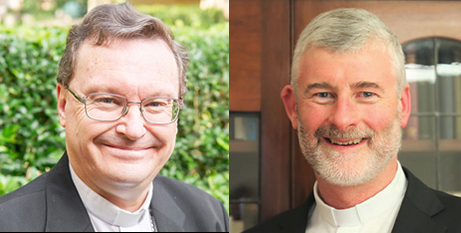 Archbishop Patrick O’Regan and Bishop Shane Mackinlay have been elected Australia’s two delegates to the XVI Ordinary General Assembly of the Synod of Bishops, to be held in 2023.

The delegates were confirmed during the recent plenary meeting of the Australian Catholic Bishops Conference.

In March 2020, Pope Francis announced that the theme of the next Synod of Bishops would be “For a Synodal Church: Communion, Participation and Mission”.

The Pope launched the international journey towards the celebration of the Synod in October this year, with local launches and a diocesan consultation phase commencing soon after.

That local engagement will support the preparation of national syntheses, which will be followed by continental meetings. Australia’s bishops will collaborate with the episcopal conferences of New Zealand, the Pacific and Solomon Islands/Papua New Guinea for that continental meeting.

That preparatory work will help shape the gathering in Rome in October 2023, which Archbishop O’Regan and Bishop Mackinlay will attend.

Archbishop O’Regan, the Archbishop of Adelaide, said he was “humbled” to be chosen to represent the Bishops Conference “at this significant event in the life of the universal Church”.

“I feel blessed to have the opportunity to participate in such a special way in the Synod of Bishops in Rome in 2023,” Archbishop O’Regan said.

“The people of God in Australia have been embarking on a process of dialogue and discernment through the Plenary Council and their own diocesan initiatives.

“This gives us a strong foundation to our contribution to the Synod process which, unlike previous Synods, has begun with local consultation and listening to many different Church groups and organisations.”

Archbishop O’Regan said: “These are exciting times for the Church in Australia and the world under the leadership of Pope Francis, who reminds us of the importance of being a Church that journeys together.”

Bishop Mackinlay, the Bishop of Sandhurst and vice-president of the Fifth Plenary Council of Australia, said he was “excited and honoured” to be elected as one of Australia’s Synod delegates.

“Pope Francis has given us a wonderful opportunity to discern together about how we might journey together in a way that strengthens our communion, participation and mission,” he said.

“For us in Australia, this is very well timed as a further extension of the discernment we are undertaking in the Plenary Council. I look forward to participating in the local consultations over the coming months and then preparing for the Synod itself in 2023.”

Sydney Archbishop Anthony Fisher OP was elected as Australia’s substitute delegate for the Synod of Bishops.

Find out more about the Synod of Bishops at: https://www.catholic.org.au/synodalchurch