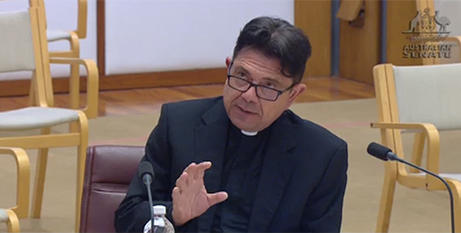 An obsession with profits that ignores the rights of workers must be scrutinised and eliminated to protect vulnerable people, a Catholic expert in migration has told the Australian Parliament.

Fr Maurizio Pettenà CS, the director of the Australian Catholic Migrant and Refugee Office, appeared before the Senate Select Committee on Temporary Migration this week. His evidence followed an Australian Catholic Bishops Conference submission to that group earlier this year.

The Australian Catholic Migrant and Refugee Office is an agency of the Bishops Conference.

Fr Pettenà observed that temporary migrants are vulnerable because of their separation from family and, in some cases, challenges in forming connections with members of the local community.

Those factors make them susceptible to exploitation.

“I know there is a lot of good will in the Australian Parliament to protect temporary migrants from exploitation,” he said.

“Legislation and regulation are an important part of the protections offered and there are probably opportunities to improve legal protections.

“But I want to make the point that the exploitation of people in Australia is also a problem of culture and of people who are breaking moral norms to enrich themselves.”

Fr Pettenà explained that the Church in Australia, led by the Archdiocese of Sydney through its Anti-Slavery Taskforce, is a leading light in helping to bring an end to modern slavery.

He also commended governments, organisations and companies that are working to ensure that their supply chains are free from slavery.

“I know there is good work underway in Australia, for example, where major organisations are now tracking their supply chains so they can eradicate the scourge of modern slavery,” he said.

“That’s part of the work that needs to be done. But I think we need to develop the moral norms around the market economy so that we celebrate the development of people – what the Church calls integral human development – just as much as we celebrate profit.”

Fr Pettenà focused on the issue of human dignity in his responses to senators’ questions in his appearance before the select committee, saying that policies and procedures are important and necessary, but dispositions and attitudes are even more critical.

“Part of the work to look after temporary migrants and any vulnerable people must be to create a market economy where rather than focusing too much on price or profit, we also consider the broader cost of transactions on the people we deal with, but particularly vulnerable people,” he said in his opening statement.

Other Catholic organisations to make submissions to the Select Committee on Temporary Migration include the Archdiocese of Sydney, the University of Notre Dame Australia, Cabrini Health, the Jesuit Refugee Service, Australian Catholic Religious Against Trafficking in Humans.