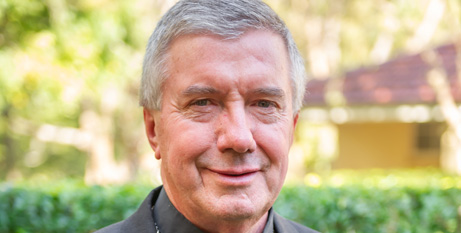 The Bishop Delegate for the Pastoral Care of Migrants and Refugees has encouraged Catholics to see in the Scriptures and in Pope Francis’ example the Christian imperative to care for those “on the move”.

Archbishop Christopher Prowse, in a letter for this Sunday’s World Day of Migrants and Refugees, said the understandable focus on the COVID-19 pandemic must not distract people from another ongoing crisis.

“Global migration is a major challenge for much of today’s world and a priority for the Catholic Church,” he wrote.

“In words and deeds, Pope Francis repeatedly shows his deep compassion for all who are displaced. Witness his encounters with migrants and refugees on the islands of Lampedusa and Lesbos. Witness his call for their full embrace: to welcome, to protect, to promote and to integrate migrants, refugees and victims of human trafficking.”

Those four verbs – welcome, protect, promote and integrate – have been a constant refrain for the past three years, after they formed the basis of Pope Francis’ 2018 message for the World Day of Migrants and Refugees.

The theme for this year’s message – the 106th the Catholic Church has marked – is “Forced Like Jesus Christ to Flee”.

Archbishop Prowse said the biblical image of the flight into Egypt of Jesus, Mary and Joseph has been the inspiration of many statements of the Catholic Church on various aspects of migration.

“Like an icon of so many of the displaced, the Holy Family represents people ‘on the move’,” Archbishop Prowse wrote.

“The Church stands alongside the fragilities and dangers of the millions attempting to find a dignified home in the world.”

The Australian Catholic Migrant and Refugee Office has prepared a kit for this Sunday’s commemoration, which includes Pope Francis’ message, Archbishop Prowse’s letter, a message from a Vatican expert on migration and stories of migrant and refugee communities in Australia.

It also has prayers and liturgical resources for communities celebrating the day.