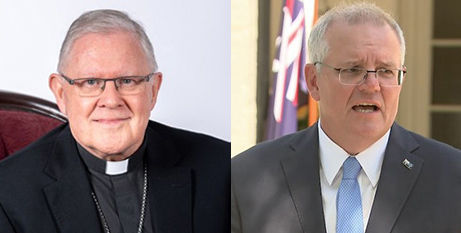 The Australian Government should provide at least 20,000 humanitarian places for Afghans in the wake of the Taliban takeover, Australian Catholic Bishop Conference president Archbishop Mark Coleridge has said.

In a letter to Prime Minister Scott Morrison last night, Archbishop Coleridge noted there has been “an outpouring of concern for the people of Afghanistan” as that country’s government has collapsed and the Taliban seized control.

He said the 3000 places offered above and beyond 8000 places over the past decade “is a substantial commitment, but more is needed”.

Based on estimates from key humanitarian organisations and pledges from other countries, Archbishop Coleridge proposed that at least another 17,000 places be made available.

“Australia has stepped up before in response to significant humanitarian crises, and I urge your government to be generous,” he wrote, adding that Catholic agencies “stand ready to assist your government with resettlement of refugees as an expression of our great concern for the people of Afghanistan”.

Archbishop Coleridge said many Afghans would find themselves vulnerable under Taliban rule, but he made particular mention of those who supported Australia’s defence personnel who served in Afghanistan, some of whom lost their lives, as well as religious minorities and women.

“It would seem our moral duty to stand with those who supported Australian military forces as interpreters or in other capacities, who it seems likely will suffer reprisals and even death for their work,” he wrote.

“We should also offer refuge to other Afghans who are likely to suffer persecution or risk being killed because of their opposition to the Taliban, or because of their beliefs, values and way of life, including members of the Christian community.

“There is a particular risk to women, and Australia’s humanitarian response should recognise and support their dignity and human rights.”